In 2007 the Internet community picked 6 wonders of Ukraine out of 21 nominees. Here are the sights that made it to the list.

1. National Historical and Architectural Reserve “Kamianets”. The reserve has an area of 121 ha and includes the Old Town surrounded by the Smotrych river and the adjacent canyon, the Castle Bridge, the Old Castle and the New Castle. The Old Castle, constructed in the 12th century, is the most famous sight in Kamianets-Podilskyi. The castle consists of 11 towers and each of them has its own history. The tallest tower is called The Pope’s Tower, as it was constructed at the expense of Pope Julius II. It also goes by the name of Karmeliuk’s Tower, since the hero of Ukraine’s national liberation struggle Ustym Karmeliuk was jailed in this tower three times. 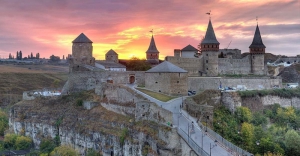 2. Kyiv Pechersk Lavra is an Orthodox Christian cave monastery erected in the times of Prince Yaroslav the Wise by monks Anthony and Theodosius. In the 11th century Lavra became the center from which Christianity spread throughout Kievan Rus. Lavra survived two world wars and Soviet persecution. In 1990 Lavra was added to the World Heritage List. 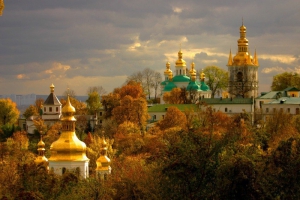 3. Reserve “Khotyn Fortress”. Built in the 10th century by Vladimir the Great, Khotyn is one of the oldest cities in Ukraine. Khotyn was one of the outposts of the Kingdom of Galicia-Volhynia. In the 1230s – 1240s the fortress’s wooden fortifications were replaced with the stone ones. Today Khotyn is one of the biggest cities in Chernivtsi Oblast. A number of films have been shot in the fortress, including Zakhar Berkut, The Ballad of the Valiant Knight Ivanhoe, Three Musketeers, The Black Arrow, The Old Fortress, Robin Hood’s Arrows. 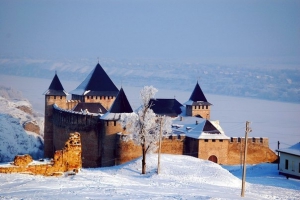 4. Sofiyivsky Park. The park has an area of 154.7 ha and is located on the outskirts of Uman, an old city in Cherkasy Oblast. The park was established in 1796 by a rich Polish nobleman Stanislaw Potocki, and was meant to be presented as a birthday gift to his beautiful Greek wife Sophia in May 1802. Incidentally, the idea of the park’s creation belonged to Sophia herself. The number of tourists coming to Uman to see Sofiyivsky Park is as big in the winter, as it is in the summer. 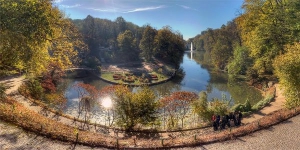 5. Saint Sophia’s Cathedral is one of the biggest Christian sanctuaries in Eastern Europe and a historical center of Kyiv metropoly. The Tale of Bygone Years says that the cathedral was erected in 1037. It has survived a series of important historic events and has been greatly damaged a few times. In 1990 the cathedral complex was added to the World Heritage List. 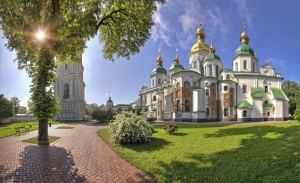 6. National Reserve “Khortytsia”. Khortytsia is the biggest island on the Dnipro river. No wonder Ukrainian cossacks picked the island as their stronghold, it is here where one of the first sites of Zaporizhian Sich was located. Another interesting fact about Khortytsia is that miniature samples of all landforms found in Ukraine are displayed here. 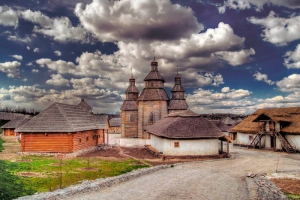